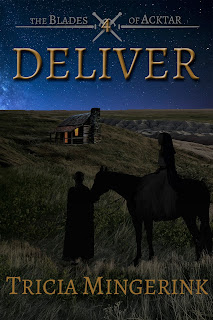 Have you ever wondered about your role in society? Have you ever felt doubts about your ability to fulfill that role? These are the questions plaguing our heroes in Deliver, the final installment of The Blades of Acktar Series, by Tricia Mingerink.
Martyn and Leith have been offered clemency by King Keevan and are allowed to continue living in Acktar. Leith returns to Stetterly with Renna and Brandi, and his fellow Blade brothers, to help rebuild the town. Eventually, he hopes to marry Renna and begin a new life with her, but what does he know about life as a farmer, much less a husband? Will the people of Stetterly accept him once they know his past? Meanwhile, Renna, never comfortable in the spotlight, must take leadership of her town as they work together to rebuild its ruins.  Martyn, still bitter and plagued with guilt, does not know how to be anything but a Blade. He accepts the job of a scout for King Keevan to protect the land from Rovers, wandering criminals without a leader, and supporters of Respen who were defeated in the war. Each of them must face the question, “What is my place?” Each of them will be tested to their limits as they discover a strength, and a peace, which comes from outside of themselves.
This is, without a doubt, the best book in The Blades of Acktar series, however, it would not be so without all the characters’ journeys and growth in the previous books.  From the beginning, I have related to Renna’s quiet introvertedness and her hesitancy to step into the limelight. Interestingly enough, since beginning this series a few years ago, I have increasingly found myself in situations at work in which I have been forced out of my comfort zone and into the leadership role. In this way, I feel as if Renna and I have grown together, and I have enjoyed cheering on my fellow introvert as we both learned to come out of our shells.
Leith’s growth throughout the series has been satisfying as well, and in this book, we are allowed to catch glimpses of him beginning to actually enjoy his life.  Granted, he is still recovering from his injuries and keeping an eye out for enemies, but he seems to finally accept the gift he has been given: a second chance in life, and a relationship with Renna. This adds a new dynamic to his character when we watch him fight to protect his family.
Martyn’s character arc was my favorite in this book. He has serious trust issues, for valid reasons, but once he decides to commit to something he becomes fully invested, even when it does not work in his favor. At the beginning of the book, he is bitter and hurt, over what he still considers a betrayal when Leith left the Blades. He struggles with guilt over the decisions he made in Defy. Not wanting to get close to anyone, he leaves his friends to become a scout for King Keevan.  In spite of this, we notice glimpses of his inner softness begin to emerge as he encounters grace, and even when he faces hypocrisy. I loved watching his shell crack throughout the story.
The title of the book is Deliver, and it was named appropriately. The author’s decision to add a fourth book to the series, allows the reader to fully appreciate how the characters have been delivered from their trials and gain closure. Even so, it is bittersweet to leave these fictional people who have become my friends. There are still stories that could be told. What happens to Jamie, and Ranson, and Brandi in the following years? I want to know what happens as government and order are rebuilt.  I want to see Leith and Renna grow their family. I would love to read a sequel series (just planting that seed in your mind, Tricia. ;-). There is plenty left to build on, but the ending was still satisfying. Thank you, Tricia Mingerink for a wonderful series. I have been so blessed by these books. Blessings to you in your future writing endeavors.
The Facebook Party for Deliver takes place this Friday from 6-9pm Central Standard Time. You can attend this party from the comfort of your own home!  Click Here to RSVP to the party: https://www.facebook.com/events/1369211736448642/

Review for By Darkness Hid by Jill Williamson

I think I may have found another author to add to my list of favorites. I’ll be honest, it took…

A Portrait of Loyalty by Roseanna M. White

Today I am reviewing the final book in Roseanna M. White’s Codebreaker series, Portrait of Loyalty. Out of all of…

I received a free copy of the book in exchange for my honest review. Since then I have been re-reading…

Ladies and Gentleman, Part 2 of Jill Williamson’s new book, King’s Folly, is here and available on Kindle! If you…